Lecture by Kate Kerrigan
The Great Pretenders: How the ‘plastic paddy’ became more Irish than the real thing.

The ‘London Irish’ are now identified as the trendy generation of young educated Irish currently taking the London arts and media scene by storm. Their predecessors, the last great wave of Irish immigrants are remembered largely as uneducated laborers fleeing 1960s catholic oppression and poverty. But there is another group that has not been so well documented. The children of those 60s emigrants; those of us who lived in the capital through ‘the Troubles’, unsure whether we were English or Irish – feeling, always, as if we had to choose. The subject of Irish identity is more complex, more acute in the children of immigrants than in the immigrants themselves. In this lecture, Kate talks about the journey that she, and her London-Irish contemporaries took to come to terms with their ‘Irishness’ at a time when it was not as fashionable to be Irish in London as it is today.

Kate Kerrigan is an author living and working in Ireland. Her bestselling novels include Recipes for a Perfect Marriage which has been translated into 20 languages and the New York Times bestseller Ellis Island. Her 2014 novel, The Lost Garden, was inspired by the Kirkintilloch tragedy, when 10 Achill men perished in a fire in their sleeping quarters while tattie hoking in 1937. In addition to her novels, Kate writes a weekly column in the Irish Mail about her life in Killala, County Mayo and is a regular contributor to Sunday Miscellany. She is group mentor on the Creative Writing Program at NUIG. In all Kate’s writing, she draws heavily on her own experience as second generation Irish and well as her family’s immigration experiences.

The guided walk will start in Dooagh and head the 2.5km towards the early 19th century Signal Tower. On the way we will investigate the site of a new, and as yet un catalogued, possible Megalithic Tomb. Weather permitting, we will stop on the craggy out-crop over looking Annagh, with magnificent views westwards to Croaghaun, Saddle Head and the corrie lakes of Lough Nakeeroge and Annagh Lough itself. After a stop and discussion of the history of the Signal Tower, we will drop down to the Quartz Quarry, and have a discussion about the geological forces which formed this unusual outcrop, before heading back to Dooagh via the bog road and a well deserved lunch in Gielty’s Clew Bay.

NOTE: This walk is classified as medium-hard, across relatively rough, open bogland and a certain level of fitness is required. Also stout footwear and good rain gear is recommended.

Eoin is the Operations Manager with Archaeology and Heritage Consultancy Ltd a company founded in 2014. For the previous 25 years he worked with Archaeological Development Services Ltd, and before that for the Scottish Office in Edinburgh.

Eoin has worked on all aspects of development led archaeological projects. He has project managed numerous large infra- structural schemes for example, the North-South Gas Pipeline and the A1-N1 road scheme.

Claire Keegan grew up on a farm in Wicklow and studied English and Political Science at Loyola University. She

subsequently went on to complete a Master in Creative Writing at the University of Wales and a second Creative Writing Masters in Trinity College, Dublin. Her first collection of short stories, Antarctica (1999), won the Rooney Prize for Irish Literature. Her long-awaited second collection, Walk the Blue Fields (2007), established her as an exceptionally gifted writer. Her third work, Foster, appeared in 2010 and won the Davy Byrnes Memorial Prize.

Ruth O’Callaghan has five collections of poetry, holds the prestigious Hawthornden Fellowship has been nominated for the Pushcart Prize and was awarded a gold medal for her poetry at the XXX World Congress of Poets in Taiwan. Her work is much anthologised and translated into many languages including Italian, German, Mandarin Chinese, Mongolian, Hungarian and Romanian. She has been invited to read in countries throughout Asia, Europe, and the USA. In America she has completed two successful TV, radio and reading tours where her audiences ranged from approximately one thousand to those on a buffalo farm where the buffalo outnumbered the poets. A sponsored visit to Mongolia by the Arts Council allowed her to collaborate with Mongolian women poets resulting in a book and a CD.

Mike Gallagher was born on Achill Island, Co. Mayo but now resides in Lyreacrompane, Co. Kerry. His poetry, stories and songs and haiku have been published in Ireland, throughout Europe and in America, Canada, Japan, India, Thailand, Nepal and Australia. His haiku have been translated into Croatian, Japanese and Dutch. He won the Eigse Michael Hartnett viva voce contest in 2010. He was shortlisted for the Hennessy Award in 2011. He is the editor of the first cut, an online literary journal.

Claire Keegan’s short story collections are ANTARCTICA, a Los Angeles Times Book of the Year, WALK THE BLUE FIELDS, published in 2007 to huge critical acclaim and winner of The Edge Hill Prize for the strongest collection published in The British Isles; and FOSTER (2010) which won The Davy Byrnes Award, then the world’s richest prize for a single story, judged by Richard Ford. FOSTER was subsequently published by Faber & Faber, abridged for The New Yorker, shortlisted for the USA National Magazine Awards and published in Best American Stories. Keegan’s stories are translated into 14 languages.

Claire Keegan grew up on a farm in Wicklow and studied English and Political Science at Loyola University. She subsequently went on to complete a Master in Creative Writing at the University of Wales and a second Creative Writing Masters in Trinity College, Dublin.

Judith Hermann was born in Berlin in 1970. Her debut Sommerhaus, später (1998) garnered extraordinary acclaim. It was followed in 2003 by Nichts als Gespenster, a volume of stories, of which individual selections were adapted for the screen in 2007. Alice, a book of five stories, was published in 2009 to international accolades. In 2014, Judith Hermann published her first novel, Aller Liebe Anfang. Her work has won her numerous awards, including the Kleist Prize and Friedrich Hölderlin Prize. Her work has been translated into over twenty languages. She lives and writes in Berlin.

10.00am Guided Walk with Eoin Halpin.

The walk will start outside Pure Magic and we will walk west along the road and up to the well preserved example of a 6,000 years old, Neolithic Court Tomb. We explore this unique landscape, taking in other Neolithic features, but also Bronze Age and later structures. We will then drop down to investigate the remains of the portal tomb, located to the rear of Pure Magic and have a discussion her about why this relatively small area of the island has such a wealth of Neolithic features. Finally we will have a look at the near-by site of the cashel or stone fort, the stones of which were robbed in the early 19th century to build the present Slievemore road. NOTE: This walk is classified as easy-medium, with some relatively steep slopes involved, but these are mostly on pathways. Nonetheless, stout footwear and good rain gear is recommended. 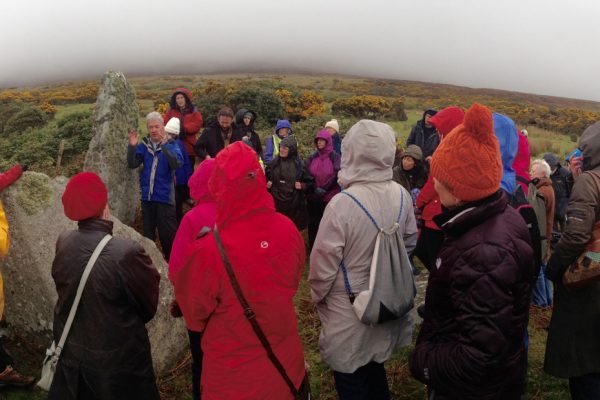 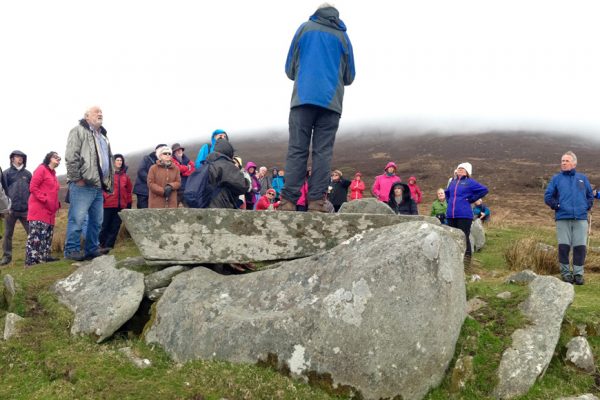 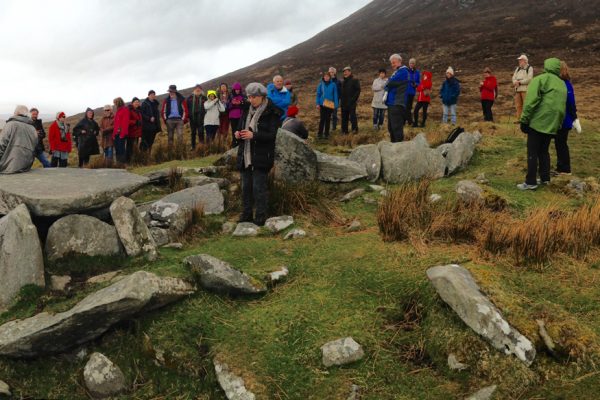 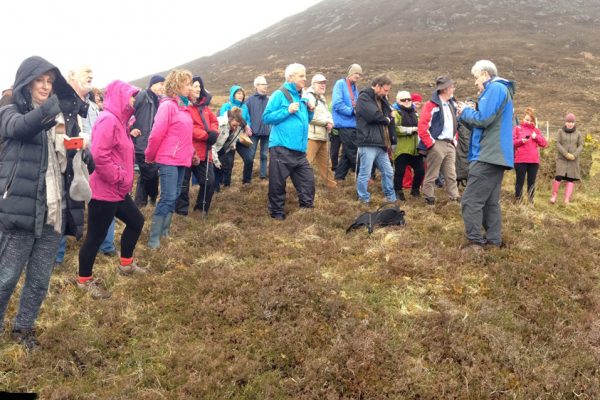 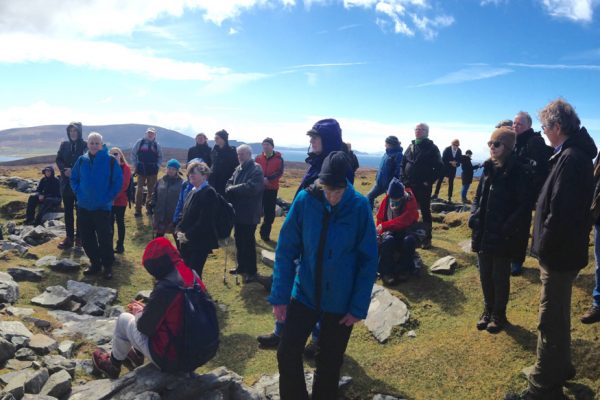 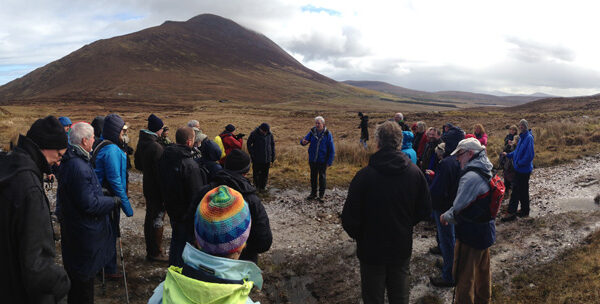